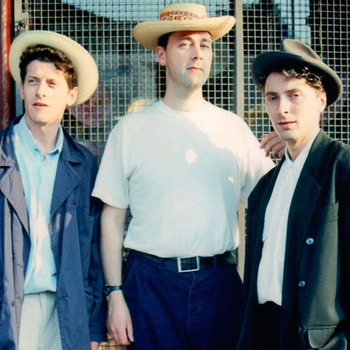 The Blue Nile is a Scottish duo (formerly a trio) known for being one of the most awesomely beautiful Sophisti-Pop bands in existence, but are equally known for their perfectionism and long periods between records. Members include Paul Buchanan (vocals, guitar), Robert Bell (bass), and formerly Paul Joseph Moore (keyboards). Their music is so carefully mixed and composed that the synthesizer effects (later replaced with acoustic-based production) end up creating an other-worldy Dream Pop feel.
Advertisement:

The three members met just after college graduation. They originally started out just composing music as a hobby (their original career wishes included English Literature, Electronic Engineering and Mathematics) but it grew into something deeper as the recording of their first album came into play.

Their formation was rather troubled. Buchanan got in touch with a hi-fi producer and wanted to start recording music in the format for fun. Buchanan auditioned several musicians, some of whom worked months with him just to drop out after not agreeing with Buchanan's ambition. Eventually he met his other 2 collaborators and their legendary Development Hell reputation started. After the release of their debut single in 1981, The Blue Nile were signed to Linn Records, a label owned by Scottish hi-fi audiovisual equipment manufacturer Linn Products, having been brought to the company by an engineer they knew. Their first album, A Walk Across The Rooftops was released in 1984 to lukewarm response that soon blossomed into critical praise as more publications picked it up. They gained some minor radio popularity in Britain, getting them a strong fanbase. Many people fell in love with the lush, carefully structured songs and Buchanan's deeply-affecting voice.

It took another 5 years to record their second album Hats. The recording conditions for this one were pretty rough. The band had scrapped an entire album's worth of material and started from scratch when writing these songs. This may seem pretty common place now, but this was back in the 80s where production was even more expensive than it is now and scrapping anything was considered a total and complete waste of time that could have gotten them dumped off their label. The reviews proved that The Blue Nile were more than just one-trick dogs and the band quickly went back into the recording studio...

... And proceeded to spend another 7 years working on their next album. Peace At Last was released in 1996 to lukewarm reviews, mostly due to the bands Genre Shift to a more acoustic-based Dream Pop sound. The album is the band's least-selling album, despite it being released on a major label.

Then, they spent 8 years recording and producing High, which was released in 2004. This album was considered a return to the throne for the band, although the band stuck with it's acoustic-based music. Currently Moore has stepped down from the project and the other two members make small tours here and there. It is unclear if there is another album in the works. In 2012, Buchanan released his debut solo album Mid Air, a sparse album that mostly featured his voice and piano; Bell contributed to a handful of songs and his remix of one of the them was issued as a single.

As stated above and throughout the article, these guys love to spend years at a time recording an album, much like their contemporaries Sade. Songs are stripped down, rewritten, tweaked, and reworked to the extremes and it shows in the music. If there is one band whose music can be described as the pure definition of "lush" it would be these guys.

The Blue Nile provides examples of the following tropes: