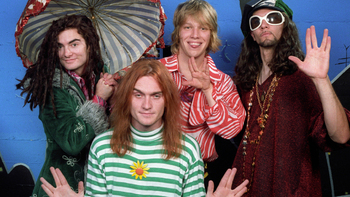 Musically, the band drew from many '60s and '70s influences, particularly in regards to catchy, sunny, singalong pop with playful, intelligent (and often lyrically dissonant) lyrics. Elements of Queen, The Beatles, The Beach Boys, The Zombies, The Monkees, The Banana Splits, Electric Light Orchestra, Badfinger, Supertramp and XTC shaped the style of the bandnote Manning first met guitarist Jason Falkner because he placed an ad for bandmates which mentioned XTC, they had their own distinctive style, one which influenced countless Power Pop group following their demise in 1994. Their arrangements were meticulously detailed and their songs catchy.

The band failed to get much success in a mainstream way in the era of Grunge, and they only produced two albums in their short lifetime. They are known for one hit, the Partridge Family-like "Baby's Coming Back", promoted by a Hanna-Barbera-produced Animated Music Video.

A whole bunch of other session musicians contributed to Bellybutton, while on Split Milk the band were joined by guitarists Lyle Workman, Jon Brion (who also handled some of the arrangements) and bassist Tom Wolk.