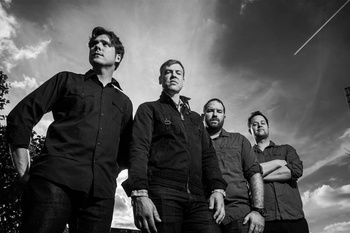 Jimmy Eat World is an Alternative Rock/Pop Punk/Emo band from Mesa, Arizona. They were formed in 1993 when singer/guitarist Jim Adkins and drummer Zach Lind, who had been friends since kindergarten, formed a band with guitarist/singer Tom Linton and bassist Mitch Porter. They released their first Self-Titled Album in 1994 on indie label Wooden Blue records. The record was mostly sloppy punk rock, with Tom singing lead vocals on all but one song, and the album has long been out of print. Soon after, Mitch Porter left the band and was replaced by Rick Burch.

After cutting their teeth in the indie scene, Jimmy Eat World got a major label contract with Capitol Records and recorded two classic albums, Static Prevails and Clarity, which were both highly influential on the rising emo scene. Clarity in particular was considered one of the best records of The '90s for its epic, sprawling, and experimental sound, especially in the 16-minute album closer "Goodbye Sky Harbor". It also is known for being the first album to feature Jim on lead vocals - he has been their lead singer for all of their later albums.

Unfortunately, their major-label contract was too good to last, as the band were dropped by Capitol due to poor album sales and Executive Meddling. While most bands would break up or toil in obscurity after this kind of thing, Jimmy Eat World had one of the biggest comebacks in recent years when they released Bleed American in 2001, which contained their chart-topper "The Middle". The album had several singles that made the Billboard Modern Rock chart and had heavy rotation on MTV, essentially bringing emo from being an underground scene to one of the biggest genres of the 00's. Pretty good for an album that was recorded entirely on the band's dime while they were looking for a new recording contract.

The band toured with blink-182 and Green Day in 2001, and recorded their follow-up Futures in 2004. Although the album was not quite as successful because of its darker and heavier sound, it still had some airplay on rock radio with the singles "Work" and "Pain". Although the band has lost a bit of their popularity over the years, they still have a dedicated fanbase and play one hell of a live show. They've also recorded several more albums since then, most notably Chase This Light in 2007 and Invented in 2010. Chase This Light shows a return to the poppy sound of Bleed American, while Invented seems to be a mix of everything they've done over the years, combining the heavy rock of Futures, the catchy singles of Bleed American and the experimental edge of Clarity.