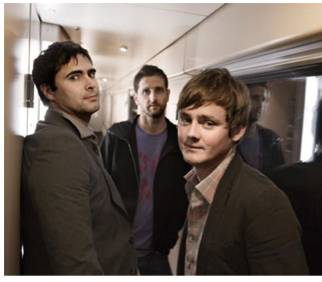 Left to Right: Tim Rice-Oxley, Richard Hughes, Tom Chaplin; Not Pictured: Jesse Quin
"Oh simple thing, where have you gone?
I'm getting old and I need something to rely on."
"Somewhere Only We Know"
Advertisement:

Keane's origins date back to 1995, when Rice-Oxley and his friend Dominic Scott got together with Hughes to form a rock band known as Lotus Eaters while studying at the University College, London. The group played covers of songs from their favorite musicians, such as U2 and The Beatles. In 1997, Chaplin joined the band as the lead vocalist, while Rice-Oxley moved to piano. The title of the band changed to Cherry Keane, named after a friend of Chaplin's mother. Shortly after she died of cancer, the name was shortened to Keane. They made their debut live appearance in 1998.

Scott left the band in 2001 to continue his education after Keane's self-produced promotional singles had limited success. The band was discovered in 2002 by Simon Williams, who had been responsible for discovering Coldplay. They released their first commercial single, "Everybody's Changing", in 2003. The attention they recieved from this track allowed them to sign with Island Records. Their debut album, Hopes and Fears, was released in 2004. It achieved great commercial success and won them the 2005 BRIT awards for Best British Album and British Breakthrough Act.

Keane's second album, Under the Iron Sea was released in 2006 and reached #1 on the UK album chart. The album built on the piano-driven melodies of Hopes and Fears by using distortion pedals on the piano to mimic the sound of electric guitars. Jesse Quin joined the band in 2008 to help record Keane's third album, Perfect Symmetry. The album was influenced by '80s Synth-Pop and employed a guitar for the first time.

Keane's fourth studio album, Strangeland, was released in May of 2012.