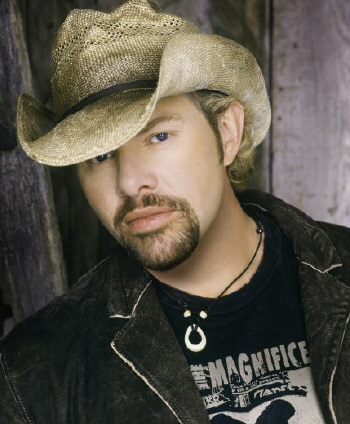 A prominent Country Music singer, Toby Keith Covel was born July 8, 1961. He started out rather strongly on the Mercury label, sending his debut single "Should've Been a Cowboy" to #1. This song went on to become the most-played country song of the entire 1990s, but Toby proved to be no One-Hit Wonder. For most of the rest of the decade, he stayed with Mercury, landing hit after hit with remarkable consistency — between 1993 and 1998, only one of his singles failed to make Top 10. Among his biggest hits in this timespan were several ballads, such as "Wish I Didn't Know Now", "Who's That Man", "Does That Blue Moon Ever Shine on You", and "Me Too", with only "You Ain't Much Fun" hinting at the swagger to come in his later years. Keith then fell victim to Executive Meddling. He had recorded an album for Mercury, but they only liked two tracks, which were both put on a Greatest Hits Album. After another album's worth of material was rejected too, he terminated his contract with Mercury in 1999.

A change to DreamWorks Records initially flopped, with his first single for the label not even cracking Top 40. But at his insistence, it was withdrawn for one of the songs Mercury had rejected, "How Do You Like Me Now?!", which went on to become a six-week #1 smash and the biggest country hit of 2000. For the next five years, almost everything he released topped the charts and saw considerable crossover success. It was also at this point that he developed his more macho, swaggering style with edgier material such as the Country Rap "I Wanna Talk About Me" and the playful "Who's Your Daddy?", but the sensitive side never went away either, as seen in "You Shouldn't Kiss Me Like This" or "My List". Along the way, he hit big with the controversial "Courtesy of the Red, White & Blue (The Angry American)" and the Willie Nelson duet "Beer for My Horses", which made Nelson the oldest country act to have a #1 hit.

After DreamWorks records closed in 2005, he seamlessly moved to his own label, Show Dog Records (now part of Show Dog-Universal Music). Although the hits have slowed some, he still managed to get a few more chart-toppers independently. Keith also scored a surprise viral crossover in 2011 when he made a video for "Red Solo Cup", which then dovetailed into radio airplay, but momentum since has slowed greatly.

Keith also owns several business ventures, including the Toby Keith's I Love This Bar & Grill restaurant chain (named after one of his songs) and a line of mezcal.