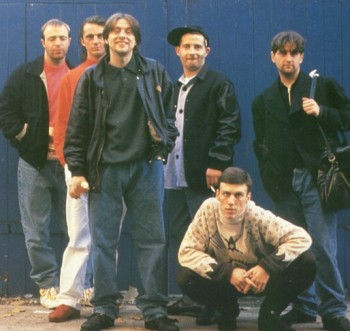 From L-to-R: Mark Day, Gary Whelan, Shaun Ryder, Paul Davis, Bez, Paul Ryder
"I saw the Happy Mondays on TV, and they reminded me of The Beatles in their "Strawberry Fields" phase."
—Paul McCartney, in the November 1990 edition of NME
Advertisement:

Happy Mondays is an Alternative/Indie Rock band from Salford, Greater Manchester, England. They were one of the most popular bands in the late 80s, early 90s, and one of the flagship bands of Factory Records. They are now considered the Trope Maker of the Madchester scene, by sucessfully mixing House music with an Indie Rock sound.

Formed in 1980 the band's original line-up was Shaun Ryder on lead vocals, his brother Paul Ryder on bass, lead guitarist Mark Day, keyboardist Paul Davis, and drummer Gary Whelan. Later on Shaun's friend Mark "Bez" Berry joined them during a live performance, by serving as a dancer and percussionist. In the early 1990s Rowetta Satchell joined the band to provide backing vocals and also dancing.

They were signed by Factory after coming last in a "battle of the bands" contest held at the Hacienda nightclub and released an EP in 1985. The significance of their band name is so far unknown; a popular rumour was that it referred to how the unemployed residents of Manchester received their benefits on Monday.

By 1987 they were already gathering a strong reputation for their live performances, which had "Bez" doing his freaky dance (there's even one of their songs called "Freaky Dancin' ") and Shaun singing while holding a lyric sheet. In the same year, they released their debut album Squirrel and G-Man Twenty Four Hour Party People Plastic Face Carnt Smile (White Out) , produced by John Cale.

But it was in 1988 that they started to hit big time. They released their second album Bummed, produced by Martin Hannett. At the same time they released from the album the single "Wrote For Luck", which would later on be remixed famously by Paul Oakenfold and Vince Clarke (the latter known as former member of Depeche Mode, the former as one of the DJ's who started to bring House music to the UK via Ibiza). By this point, they achieved their particular sound, by mixing, besides Indie Rock and House, genres and styles such as Funk, Northern Soul and Psychedelic Rock, as well as using Latin-style rhythms and Country music twangs. Compared to the more traditionalist songwriting and heavy psychedelia of their counterparts The Stone Roses, the Happy Mondays sound was more technologically modern, based on Sampling, and dancefloor-friendly.

However, it was only through the release of the Madchester EP , that the Mondays finally got into Top of the Pops. They played alongside The Stone Roses, who also got into the national charts through the "Fools Gold" single, transforming what was mainly a regional scene into a full-blown national craze which also got the nickname "Baggy" (largely due to the baggy clothes worn by both bands, though the label "baggy" was applied to the Mondays and similar bands that emphasised the funky elements of their sound, as opposed to the more psychedelic Madchester popularised by the Roses), at the same time that Rave culture, fueled by Acid House and Techno, started to cause interest among the nation in the so-called "Second Summer of Love".

After these aforementioned sucesses, the band went to Eden Studios in London and recorded their next album, with Paul Oakenfold and Steve Osborne as producers. Their third album, Pills 'n' Thrills and Bellyaches, continued the House/Rock fusion, but added Hip-Hop style beats to the mix. Among their big hits are two tracks from the album, one being "Kinky Afro", the other being a cover of John Kongos' "Step On".

Their success brought them to playing in a lot of countries, including France, Iceland and Brazil, where they played at the Maracanã Stadium, in Rio de Janeiro. They also had triumphant gigs at festivals like Glastonbury.

The recording of the follow-up, Yes Please!, however, was a disaster, to the point that, at the time of release, it got mixed reviews (one of the more famous pans read simply "No thanks."), got poor album sales (at least compared to their previous album, and in the rise of Grunge music stateside and Brit Pop at home) and famously caused Factory Records to go bankrupt. The band broke up soon afterwards.

Shaun Ryder then kicked his drug addictions and formed Black Grape in 1993 with Bez and two rappers, a drummer and a guitarist, achieving a relative success: their first album It's Great When You're Straight... Yeah (1995) went to #1 in the UK and spawned a few hits, but their second album Stupid Stupid Stupid (1997) flopped.

They were later portrayed/parodied in 24 Hour Party People, the movie about the story of Factory Records, which included a cameo of bassist Paul Ryder as a gangster. The title of the movie comes from the single and debut album track of the same name.

They reformed from time to time, albeit without the full original line-up, releasing a fifth album, called Uncle Dysfunktional. In 2012, Shaun announced a third reunion, but this time including the original line-up plus Bez and Rowetta.

Tropes Used by the Band