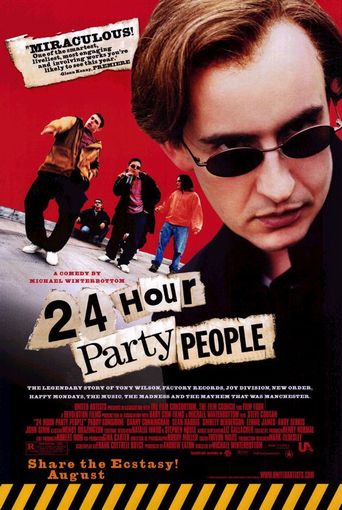 "You're going to see a lot more of that sort of thing in the picture. I don't want to say too much, don't want to spoil it. I'll just say one word: 'Icarus'. If you get it, great. If you don't, that's fine too. But you should probably read more."
— Tony Wilson
Advertisement:

24 Hour Party People is a 2002 British Biopic telling the rise and fall of Tony Wilson (played by Steve Coogan), a local news reporter who attends a pivotal gig by The Sex Pistols in the 1970s which changes his life. Believing he is living in "one of the most important fucking times in human history", he decides to start a record company called Factory Records and a club, the Haçienda. He also decides to Break the Fourth Wall and converse with the audience a lot, because it's that sort of film.

The film follows Tony and Factory Records as money is lost, Joy Division (one of Factory's first signings) lead singer Ian Curtis commits suicide, causing the band to rename themselves New Order and veer off in a totally different direction, Record Producer Martin Hannett goes insane and tries to kill Tony, the birth of "Madchester" music and rave culture, The Happy Mondays sell their equipment and studio for crack and then attempt to hold back their new album from Factory for ransom... You wouldn't get this kinda stuff in a film about EMI.

The film focuses largely on two of Factory's most popular artists, Joy Division (and their later reformation as New Order) and Happy Mondays, although it also features A Certain Ratio and Durutti Column to a lesser extent.

note how "outrageously posthumous," you ask? The label was already bankrupt for nearly a decade by the time the film premiered, complete with its own serial number (FAC 401). The film's website, DVD release and companion book (written by Tony Wilson himself) all received catalog numbers as well (FAC 433, FACDVD 424, and FAC 424, respectively, with the DVD release marking the only use of the "FACDVD" prefix in the entire Factory catalog), as did the reconstruction of the Haçienda used for the film (FAC 451, a significant pick as FAC 51 was the catalog number for the actual club).

Not to be confused with the trope 24-Hour Party People (which is named after the Happy Mondays song that also gives this movie its name) about background extras who show up at parties for or thrown by a work's main characters. Compare Control, a more serious biopic that specifically focuses on Ian Curtis.