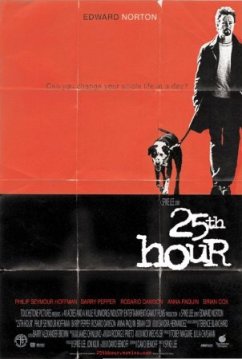 Can you change your whole life in a day?
Advertisement:

25th Hour is a 2002 Spike Lee film based on a David Benioff novel of the same name.

It is Monty Brogan's (Edward Norton) last day of freedom before he begins serving a seven-year prison sentence for dealing drugs. He plans to spend his last night of freedom at a club with his childhood friends Jacob Elinsky (Philip Seymour Hoffman) and Frank Slaughtery (Barry Pepper), his girlfriend Naturelle (Rosario Dawson), and his father, James (Brian Cox). Frank, Monty's best friend since they were both three, is an investment banker on Wall Street. Jacob is a quiet, dorky high school teacher who comes from a privileged background.

This is one of Spike Lee's most acclaimed films. It was second on AV Club's top films of the decade and is on the Roger Ebert Great Movies List.