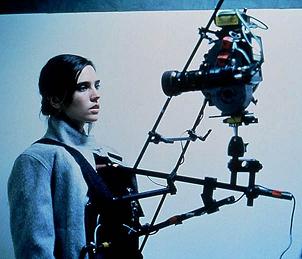 Aka the Bodymount Cam or SnorriCam: The camera is mounted on the actor's body and aimed at the face, so as the actor moves, their face remains steady and in focus while the background bounces and moves. Similar to the Head Cam, but the footage is looking in the opposite direction.

Its use is normally for when the subject is moving quickly but one wants to keep a strong emphasis on the actor's facial expressions. Since it gives a continued shot of their face while in a slightly surreal manner the world starts to slide and shift, it can be particularly effective when the subject is in a state of confusion, shock or disgust, as we get to keep a good look at their face at a point when they are erratically stumbling around and we get to experience the discomforting and unsettling movements of the world around them.

Often used with a Dizzy Cam and P.O.V. Cam during a double twirl in two-person dance scenes to put us between the dancers, giving a greater sense of intimacy and excitement.