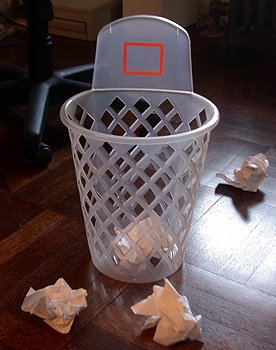 Basketball at work? It sure beats work at work.
Karen: That bathroom is disgusting. When's the last time you cleaned up in there?
Brent: I think you might have used the men's.
Karen: Don't guys know how to aim?
Wanda: Ugh, gross. I don't wanna hear that.
Karen: No, I mean it. There were crumpled up paper towels all around the trash. Guys can't aim!
— Corner Gas, "Grad '68"
Advertisement:

Crumpling up a piece of paper, and attempting to toss it into a wastebasket across the room without getting up is deemed a sport. Failure to get a basket will often derive many comebacks and general bad attitude that can follow a man or woman around.

In fiction, the competency of the thrower is often directly proportional to how well that character does at other things.

Most of the time there will be a pile surrounding the basket of missed previous tries. If it's a literal waste basket, you can see more inside, unless the character is really a terrible shot.

Often shown as a part of a Writer's Block Montage.

This is also, of course, Truth in Television, to the extent that one can buy miniature backboards and nets to hang over the bin.

Compare Office Sports and Blind Shoulder Toss. Office Golf is the equivalent for executives with nothing to do.