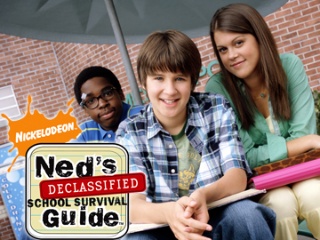 Your results may vary.note (L-R) Cookie, Ned and Moze
"In a middle school full of bullies, insane teachers, and gross school lunches, Ned Bigby—that's me—and my two best friends try to do the impossible: create a guide to help you survive school."
— Ned, at the beginning of each episode
Advertisement:

Ned's Declassified School Survival Guide is a Nickelodeon Kid Com created by The Fairly OddParents writer Scott Fellows that ran from September 2004 to June 2007. In stark contrast with other live-action Nickelodeon offerings at the time, it reveled in quick-paced, postmodern absurdist humor, featuring No Fourth Wall, no Laugh Track, and restricting every plot (sans the Grand Finale and one late-series segment dealing with parties) to the halls of (or, in one case, the morning journey to) James K. Polk Middle School.

Ned Bigby (Devon Werkheiser) is the clever but Book Dumb protagonist who is dedicated to completing an all-encompassing guide "to help you survive school," covering every issue from tests and dodgeball to puberty and relationships. Reflecting its creator's animation roots, the sitcom is one of the rare live-action productions to utilize a Two Shorts format; every 11-minute story serves as a "Survival Guide to: [name of topic/subject]", wherein Ned and his two best friends Gadgeteer Genius Simon Nelson "Cookie" Cook (Daniel Curtis Lee) and tomboy Jennifer "Moze" Mosely (Lindsey Shaw) each have their own storyline that requires his advice on the subject.

That aforementioned advice comes Once an Episode: when the moment for giving tips comes, the theme music starts, Ned turns to the audience, and begins speaking in an almost Edutainment Show manner with the simple phrase "If you're [someone] who's confused about [something], check out these tips." Despite customary Genre Blindness and Moze usually being the voice of reason, Ned seems permanently aware of the Fourth Wall, with other characters occasionally acknowledging it themselves, to their own minor shock and surprise. In solving their respective dilemmas, Cookie tries outlandish theories, Moze attempts to find a straightforward and pragmatic solution, and Ned usually applies scientific rigor.

Originally, the primary emphasis was delivering the tips and focusing on school matters such as homework, lockers, and school clubs. Later on, as the characters progressed through seventh and eighth grade, the stories expanded to focus on the complex relationships between the maturing characters, and the tips followed suit by now exploring on how to deal with the various social situations one will find themselves in adolescence. Along for the ride is a cast of quirky students and teachers who will always ensure that Hilarity Ensues.

The show ran for 54 episode over three seasons, and ended with the hour-long episode "Field Trips, Permission Slips, Signs & Weasels". According to Devon Werkheiser, there were plans for a sequel series that would follow the characters throughout high school, with a pilot for the potential continuation filmed in 2008, but Nickelodeon declined. However, Fellows would later go on to create two other Nickelodeon live-action series — Big Time Rush and 100 Things to Do Before High School — as well as the cartoons Johnny Test and Supernoobs.

Scene from "Ned's Declassified School Survival Guide" - Ep 39B "Lost and Found". Ned finds a pair of sneakers signed by NBA Star, Carmelo Anthony, in the lost and found and wants to claim them for himself. Moze keeps preventing him due not wanting someone to lose their valuables due to a past experience. So Ned comes up with a plan to stop her... except it hits a hitch.

Scene from "Ned's Declassified School Survival Guide" - Ep 39B "Lost and Found". Ned finds a pair of sneakers signed by NBA Star, Carmelo Anthony, in the lost and found and wants to claim them for himself. Moze keeps preventing him due not wanting someone to lose their valuables due to a past experience. So Ned comes up with a plan to stop her... except it hits a hitch.