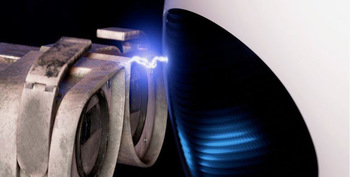 ...That it only took a moment to be loved a whole life long...
I said "Ooh! Girl." Shock me like an electric eel.
"Baby girl." Turn me on with your electric feel.
— MGMT, "Electric Feel"
Advertisement:

This trope appears in romantic works, and is featured prominently in Young Adult Literature fiction novels. The touch of a love interest will either literally or metaphorically feel like a shock of electricity.

Creators of works tend to use this trope to signify to the reader that the crush is The One, or that the protagonist is making a deep and important connection to another character. In particularly blatant examples, the shock may be so strong as to cause both characters to retract their hands as if in pain.

In a visual works, live-action films may employ camera work and auditory spark sounds. In animated works, this effect can be exaggerated and the characters whole body can react. If a robot, android, or cyborg are in this situation, literal sparks may fly.

The French expression for instantly falling in love with someone is "coup de foudre", meaning "struck by lightning".

The Lightning equivalent to Snow Means Love and Flames of Love (or Fireworks of Love). Compare to Romantic Rain if it overlaps with thunderstorms, Love at First Sight, Electric Instant Gratification, and Lightning Glare. Contrast to No Sparks and Dead Sparks.