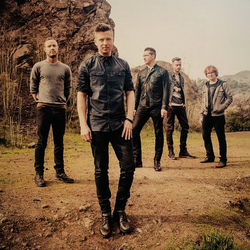 OneRepublic is a pop-rock band from Colorado.

Having its origins back in 1996, with school friends Ryan Tedder and Zach Filkins (current lead vocalist and lead guitarist, respectively), the band was established in 2002 and started gaining prominence on the website MySpace under the name Republic. They caught the attention of, among others, Timbaland's label, Mosley Music Group. Timbaland would then, in 2007 (the year OneRepublic released their first album, Dreaming Out Loud), remix their song "Apologize", turning it into a major hit, contributing to the band's success.

Despite being classified as a pop-rock band, OneRepublic's music style is very variable, being influenced by genres such as alternative, hip hop, ballad and classical music. Life and optimism are frequent themes in their songs, as well as some tunes about specific feelings, Silly Love Songs and songs with religious allusions (and those allegedly religious).

I'm staring down myself, counting up the tropes: