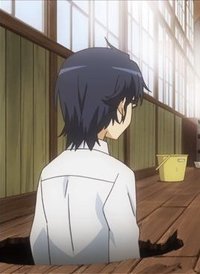 No idiot has ever fallen through the floor before!
"It's amazing such shaky buildings can stand up well enough for the characters to walk upstairs in the first place."
— Roger Ebert, Ebert's Bigger Little Movie Glossary

When the floor suddenly gives way underneath someone, usually due to the boards having been weakened by rot or something heavy falling on them.

See also Bullethole Door, where a floorboard (or wall) failure is invoked via More Dakka to create a passageway that wasn't there before.