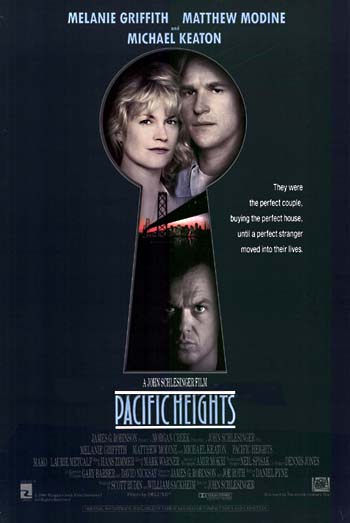 Patty Palmer (Griffith) and Drake Goodman (Modine) have just bought a large $750,000+ house in the San Francisco neighborhood of Pacific Heights, where they renovate it and plan to rent the two apartments on the ground floor in order to help cover the mortgage. When they meet Carter Hayes (Keaton), everything seems perfect, as he appears to be the ideal tenant... until they discover that he is a shady con artist who refuses to pay either the rent or the security deposit and changes the locks on all the doors. In short order, he inflicts a campaign of terror on his hapless landlords through scare tactics, verbal baiting and turning his own apartment into a dark cockroach-infested den. It is all part of Hayes' elaborate scheme to use the California tenant laws against the Goodmans to obtain the property cheaply.

Ultimately, though, he goes too far, inspiring Patty to seek revenge...