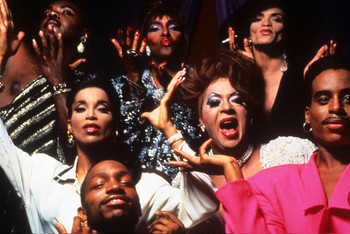 Having a ball...
wish you were here.
"Some of them say that we're sick, we're crazy. And some of them think that we are the most gorgeous, special things on Earth."
— Venus Xtravaganza
Advertisement:

Paris Is Burning is a 1990 documentary directed by Jennie Livingston about queer counterculture in New York City in the mid-to-late 1980s, primarily through ball culture. The film was the end product of Livingston taking an interest in the culture while studying film at NYU after graduating from Yale, and took six years to produce.

It mainly follows several drag queens and transgender women influential to the culture of the time, revolving mainly around their participation in drag balls, which were essentially beauty, fashion and dance contests. It also largely talks about intersectionality of race and class as well as LGBT+ identity, how they deal with issues such as AIDS, racism, poverty, violence and homophobia, and the common slang they use (ex: "shade", "reading", "legendary"). Also shown is vogueing, which got its start in this culture, and with the first outside mention being in a song that samples the movie (and then shortly afterwards again more famously by Madonna).

Featured in the film are other discussions about belonging, centered around the "houses" of the ball world (imagine maybe mafia houses but really camp instead) and the sense of community they provide, as they largely function as surrogate families welcoming those rejected by their own families. So strong is the feeling of acceptance offered that many youths who would not be able to afford food or rent would put their efforts into stealing clothes because of the life given at the balls.

The film won the Grand Jury Prize at Sundance Film Festival and was added to the National Film Registry in 2016.

Nothing to do with the film Is Paris Burning?, except for an obvious joke with the title.