Film / Eye for an Eye 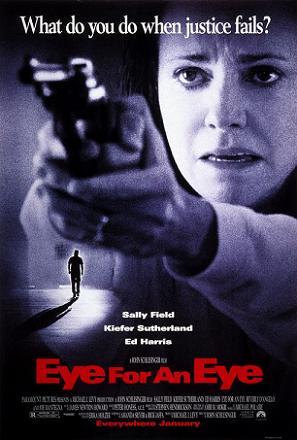 Eye for an Eye is a 1996 thriller film directed by John Schlesinger, starring Sally Field, Ed Harris, and Kiefer Sutherland.

Karen McCann (Field) and her husband Mack (Harris) find their happy lives shattered when their 17-year-old daughter Julie is raped and murdered at home by deliveryman Robert Doob (Sutherland) while on the phone with her mother.

When Doob is released due to mishandled evidence, he begins making overtures to the McCanns' six-year-old daughter Megan while also intimidating Karen, who joins a vigilante group to defend herself.

Not to be confused with the 1981 film An Eye for an Eye with Chuck Norris and Christopher Lee.

Eye for an Eye provides examples of the following tropes: