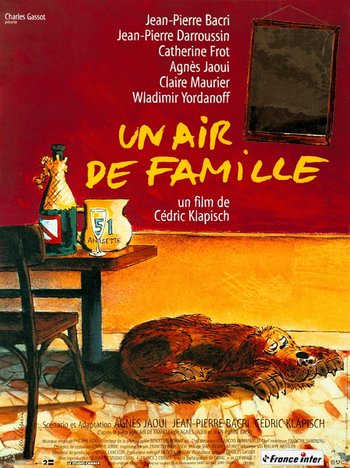 Family Resemblances (Un air de famille) is a 1996 French comedy film directed by Cédric Klapisch, starring Jean-Pierre Bacri, Agnès Jaoui, Jean-Pierre Darroussin, Catherine Frot, Vladimir Yordanoff, and Claire Maurier. It is an adaptation of a homonymous play by Agnès Jaoui and Jean-Pierre Bacri, with the same cast. Every Friday, the Ménards have dinner together in a restaurant. The family is made of Philippe (Vladimir Yordanoff), an executive in a computer company, his wife Yolande (Catherine Frot), his brother Henri (Jean-Pierre Bacri), the owner of a brasserie, his sister Betty (Agnès Jaoui), who works in the same computer company, and his mother (Claire Maurier). This time it will be a special evening: it is Yolande's birthday, Philippe is nervous about an interview he gave on TV and Henri's wife has left home.