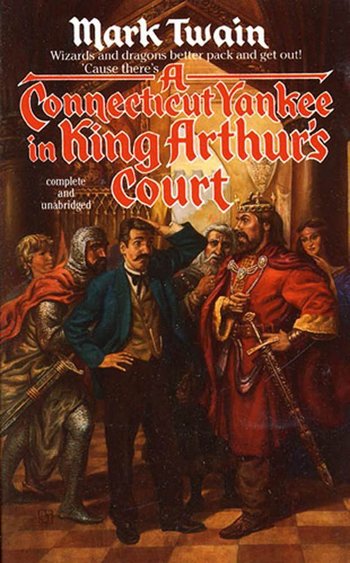 A Connecticut Yankee in King Arthur's Court is a classic 1889 novel written by Mark Twain. Hank Morgan, a resident of Hartford, Connecticut, suffers a blow to the head and inexplicably awakens to find himself in sixth century Britain. There, he is able to convince King Arthur that he is a powerful wizard and ends up assuming the job of the king's adviser, and attempts to impose modern technology and values onto the society.

The novel is both a satire and a seminal work of time travel science fiction. The story has been adapted many times for film, television, and other forms of media. Surprisingly enough, given the book's popularity, most literary critics rank Connecticut Yankee among the worst of Twain's written works. Although, that's like saying Macbeth is the worst of Shakespeare's tragedies.

It's in public domain; the full text can be downloaded for free at Project Gutenberg