This Is My Boomstick 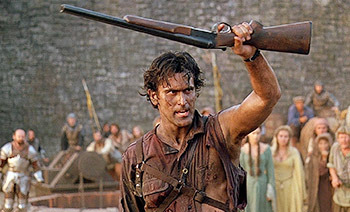 An elegant weapon from a more modern age.
"Yeah. All right, you primitive screwheads, listen up. See this? This... is my BOOMSTICK! It's a twelve gauge double barreled Remington, S-Mart's top-of-the-line. You can find this in the sporting goods department. That's right, this sweet baby was made in Grand Rapids, Michigan. Retails for about $109.95. It's got a walnut stock, cobalt blue steel and a hair trigger. That's right. Shop Smart. Shop S-Mart. YA GOT THAT!?"
— Ashley J. Williams, Army of Darkness
Advertisement:

In a God Guise or Time Travel scenario, a modern person with some technological convenience uses it to try and impress the more primitive locals. Guns and cigarette lighters are common versions, with Polaroid cameras and portable radios not far behind. Japanese fiction has a particularly ludicrous variant, where a medieval Europe analogue is introduced to such "unbelievable technologies" as fold-forged sabers and short-form writing systems. See also Convenient Eclipse for another way to impress the locals.

It's almost never played straight anymore. If the time traveler gives modern technology to the locals, it's Giving Radio to the Romans. If it's done with contemporary music, it's A Little Something We Call "Rock and Roll". If the time traveler uses the technology to pretend to have outright supernatural powers, they're a Sham Supernatural. If the natives buy it, a Cargo Cult may spring up. Has a strong overlap with Firearms Are Revolutionary, in which firearms prove to be a major game-changer when a society invents them.

Named for a famous line in Army of Darkness, the third Evil Dead film, where the time-displaced zombie-fighting housewares stocker Ash is threatened by medieval peasants. He has a shotgun. Violent Hilarity Ensues. Nothing to do with an actual Boom Stick.

[Trope Namer] Ash proves to the whole medieval village he means business by showing off his trusty double-barreled Remington shotgun.

[Trope Namer] Ash proves to the whole medieval village he means business by showing off his trusty double-barreled Remington shotgun.