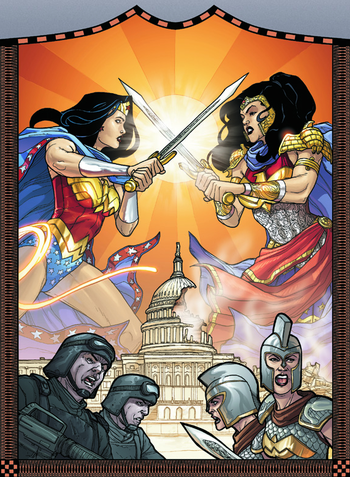 Amazons Attack! was a 2007 DC Comics miniseries, written by Will Pfeiffer with art by Pete Woods. The plot involves the return of Wonder Woman's mother, Queen Hippolyta, from the dead. Under the advice of Circe, a frequent enemy of the Amazons in the past, she leads the Amazons in an attack on Washington, D.C. aimed at rescuing her daughter from American captivity.

Of course, all is not exactly what it seems, and among other things, Wonder Woman's captivity had been engineered by Circe herself. The plot involves a number of subplots, including the Justice League's attempts to fight back, the internment of women suspected of Amazon sympathies by the U.S. government, and an ill-fated mission by Supergirl and Wonder Girl to speak to the President of the United States. Events from Amazons Attack also affected a number of other books, including the weekly Countdown to Final Crisis series, Supergirl (2005), and Catwoman (2002).

Ultimately, the war ends and the true players behind the conflict are revealed, but only after considerable death and destruction.

For a miniseries expected to be a major "event" comic, sales of Amazons Attack were disappointing at best, and the critical/fan reception even worse. While most fans agree that Pete Woods contributed gorgeous art to the project, it's difficult to find positive comments about any other aspects of the project.