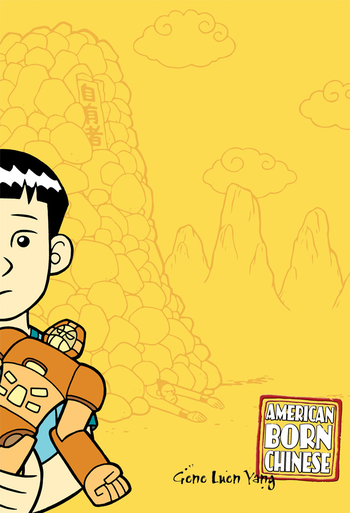 Timmy: My momma says Chinese people eat dogs.
Jin's teacher: Now be nice, Timmy! I'm sure Jin doesn't do that! In fact, Jin's family probably stopped that sort of thing as soon as they came to the United States!
Advertisement:

Written and drawn by Gene Luen Yang, American Born Chinese is a Graphic Novel dealing with the trials and tribulations of Asians attempting to integrate into American culture.

While each story arc works well on its own and appear to be independent, by the end all three cleverly converge into a climax that affirm the need to embrace one's heritage and Be Yourself.

Released in 2006, it was a finalist for the 2006 National Book Awards (becoming the first graphic novel recognized by the National Book Foundation) and won the 2007 Michael L. Printz Award.

A Disney+ series focusing on Jin Wang is in the works

See also Level Up, another graphic novel by the same author about a young Chinese-American man trying to find his way in the world.