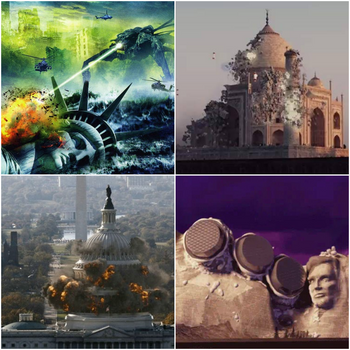 Aliens, pixels, explosions and pies. They sure love wrecking famous monuments.note  L - R, top to bottom: War Of The Worlds 2 The Next Wave, Pixels, White House Down, and Cloudy with a Chance of Meatballs
"Give us McNeal or we will lay waste to your cities with our anti-monument laser."
— Lrrr, Futurama, "When Aliens Attack"
Advertisement:

So you're a marauding monster, invading alien force, overblown natural disaster, fanatical terrorist, or anything that has a tendency to cause massive collateral damage. But you are not going to destroy any random building, are you? No, where is the fun in that? You're going to behead the Statue of Liberty, or blow up the White House, or anything recognizable enough that by destroying it, you can show the world that you mean business.

If you plan on attacking all over the world make sure you target a wide range of easily identifiable landmarks throughout. Due to Small Reference Pools, no one will take you seriously unless you get the Pyramids, the Eiffel Tower, the Taj Mahal, the Sydney Opera House, the Westminster Clock Tower ("Big Ben", that is), or in works made before 9/11, the World Trade Center. Just killing people throughout the world won't cut it.

A weird exception is that it's very, very rare for any monument-destroying force to harm the Lincoln Memorial. It's not unknown, but the Great Emancipator's statue takes significantly less damage than you might expect.

On the flip side, Japan's Tokyo Tower gets this so often its joked by fans as 'Just another bad day for Tokyo Tower.'

Occasionally inverted when an occupying power takes control of a landmark of some kind, forcing the defenders to destroy said landmark.

A consequence of the Eiffel Tower Effect. Frequently seen in disaster movies. When characters deliberately aim for monuments for symbolic value, this overlaps with Smash the Symbol. Sometimes inverted: The monument —although battered— is the only thing left standing in the city After the End.

Compare Big Applesauce, Monumental Battle, Rushmore Refacement, The Tokyo Fireball, Tilting Tower of Pisa, and Washington D.C. Invasion. Tokyo Tower gets messed up so much it's also its own trope. This trope could be Justified if Landmarking the Hidden Base is being utilized and the bad guy finds out. See also Weaponized Landmark when the monument shoots back.

Not to be confused with Monumental Theft.