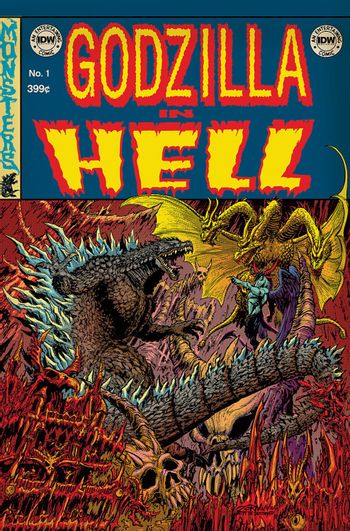 The fifth Godzilla miniseries by IDW Publishing, Godzilla in Hell is Exactly What It Says on the Tin, with the King of the Monsters plummeting down into the bowels of the Earth and finding himself at the Gates of Hell, proceeding to smash his way through every level and every demon standing in his way, trying to discover just how he ended up getting condemned.

Godzilla in Hell is written and drawn by multiple artists. James Stokoe writes and draws #1, Bob Eggleton handles #2, Buster Moody and Ulises Farinas are on #3, Ibrahim Moustafa and Brandon Seifert do #4, and Dave Wachter brings it to a close in #5.