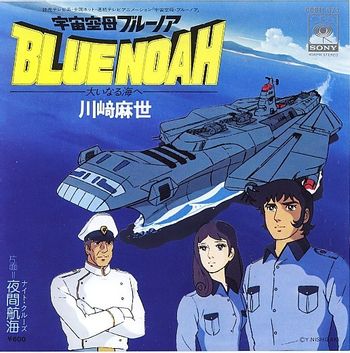 Either a Spiritual Successor to or a ripoff of Space Battleship Yamato made by the same company, Uchū Kūbo Burū Noa is a 1979 anime series by Office Academy.

The year is 2052. A great truce among warring nations has been formed, and peace has finally descended on the world. In this time of prosperity and harmony, scientists from all over the globe have formed nine different firms of scientific investigation around the world. Peace is interrupted when the Death Force, aliens searching for a new home after leaving their decaying solar system, rain surveillance cameras hidden among a meteor shower onto Earth to check out how fitting it is for colonization. However, one of these scientists finds the camera and calls a meeting in Hawaii. The aliens attack, and the scientist gives his son, Shin, the key to the eponymous submarine. Collin gathers a small team of students and finds the crew of a detachable sub along with the space carrier, and it's up to them to fight the Death Force.

Shown briefly on American TV in 1985 as Thundersub, the show has faded into obscurity. It just never caught on as Star Blazers did.