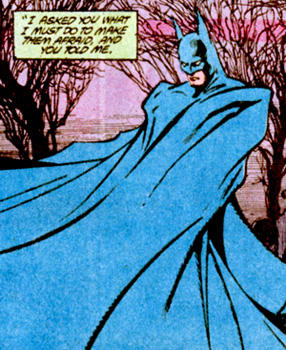 A cloak that goes all the way around the body like a tube, with only a single slit down the front to permit mobility. It will sometimes exceed the wearer's height and have a significant portion dragging on the floor, although it usually cuts off at precisely floor level.

Often worn by characters of great power and authority, this particular garment tends to make the wearer seem more mysterious because others cannot tell what his or her body looks like under all the cloth when it is closed. Normal capes may sometimes be drawn as mantles for dramatic effect.

Occasionally, two-bit characters may wear such mantles in order to "feel big", but Rule of Funny dictates that they will suffer from all the disadvantages that such an item would have in Real Life (such as tripping, catching on stuff, sheer weight, etc). Bonus points if they actually "borrow" one from someone who deserves to wear it.

This type of mantle sometimes comes with an attached hood in order to cover the head as well as the body. Ladies wearing a mantle and nothing else are an uncommon form of Fanservice. Compare with the less encompassing Badass Longrobe.