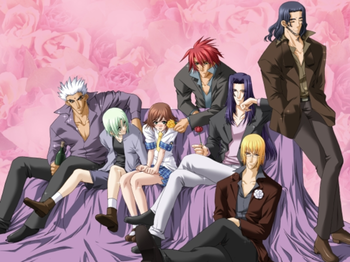 Yo-Jin-Bo ("The Bodyguards") is an Otome Game by Two-Five, available in English from Hirameki International. Ordinary High-School Student Sayori finds a pendant while exploring a castle's ruins with her history club. She takes the pendant home with her. That night the ghost of a long-dead princess appears and gives Sayori a vision of how she, Princess Hatsuhime, died. Sayori then wakes up, in Hatsuhime's body.

Lucky for her, six highly skilled body guards arrive to help her make it back to her castle safely.

Not to be confused with the similarly titled Akira Kurosawa film Yojimbo.