The Coats Are Off 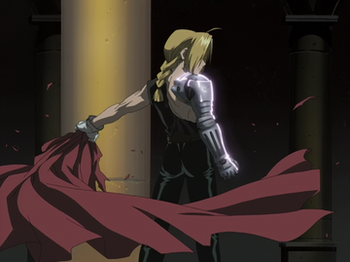 Asses are about to be kicked.
Fangirls are about to squee.
"When Ric Flair whips his jacket off, that's when shit gets real."
— Spoony
Advertisement:

Everyone knows that wearing a longcoatnote feel free to mentally substitute Badass Cape in this description as needed is one of the surest ways to show that you’re a badass, because nothing says “don’t fuck with me” more than having a long dark coat billowing out behind you as you walk. So how does one ratchet up the stakes when such a character is really serious about delivering a beatdown? They take that coat off.

Basically, when someone loses his coat, his badass level increases drastically. He can still be defeated, but he will look good while doing it and be very hard to put down. It could be argued that this effect is why Badass Longcoats exist in the first place.

In an actual combat situation, this does make sense. Coats and cloaks look great but are also bulky and tend to move about on their own quite a bit. This restricts the wearer's movements and limits their effectiveness in battle. Shedding the coat will not only make movement easier but also deny the enemy a potential grappling point. This also has the added advantage of getting the garment out of the combat zone. After all, who wants to get blood on their badass coat? Another possible use for a cloak in a melee combat is to wrap it around the off hand to use it as a shield. The cloak would of course be ruined, but better damage the cloak rather than arms or body.

Bonus badass points if you are shirtless beneath the coat, or if you're wearing pants with suspenders. Especially if this reveals a lot of muscles were underneath that flowing coat. Badassness levels will also increase exponentially if you're wearing business-like attire underneath — the nicer, neater, and more expensive the better. Heck, the badass level increases even if you're wearing a sleeveless shirt. EXTRA bonus points if the coat is revealed to be weighted clothing.

Compare The Glasses Come Off.