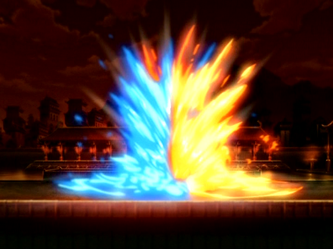 Their powers enhanced by the comet, Zuko and Azula engage in an Agni Kai for the right to be Fire Lord.
Azula: I’m sorry it has to end this way, brother.
Zuko: No, you’re not.
Advertisement:

Azula's mental stability, undermined by the betrayal of her childhood friends at the Boiling Rock, begins to deteriorate as her coronation as Fire Lord approaches. Zuko and Katara confront her just as she is about to be crowned, but Azula challenges her brother to an Agni Kai. Zuko, although initially winning, is gravely injured when Azula throws lightning at Katara which he dives in the way of. Aang duels Ozai without result, still unwilling to kill him. Sokka, Toph, and Suki attempt to halt the airship fleet but are soon separated, while the Order of the White Lotus battles for Ba Sing Se's freedom.