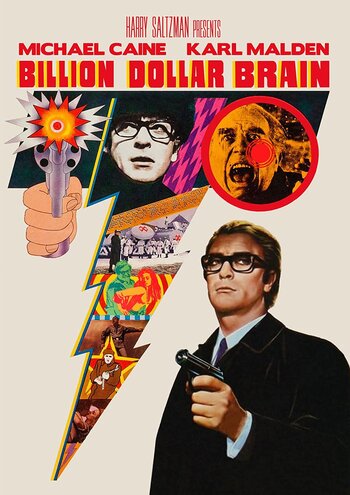 "Some games are more dangerous than others."
Advertisement:

Billion Dollar Brain is a 1967 Spy Film directed by Ken Russell, based on the novel by Len Deighton. It is the third of the Harry Palmer series starring Michael Caine, following Funeral in Berlin. Françoise Dorléac, Karl Malden, Oskar Homolka, and Ed Begley also star. It was the last theatrical movie of the series, followed by a pair of made-for-television films 18 years later.

Now a private detective, Harry Palmer receives a mysterious phone call from an anonymous client tasking him with transporting an apparently innocent Thermos flask to an old friend in Helsinki.

Palmer begins to question his friend's motives, and he quickly gets caught up in a conspiracy involving biological weapons and a megalomaniacal Texas oil billionaire who plots to overthrow Communism with the help of a powerful supercomputer.

Billion Dollar Brain is the last film of actress Françoise Dorléac, who died several months before release in a car accident.