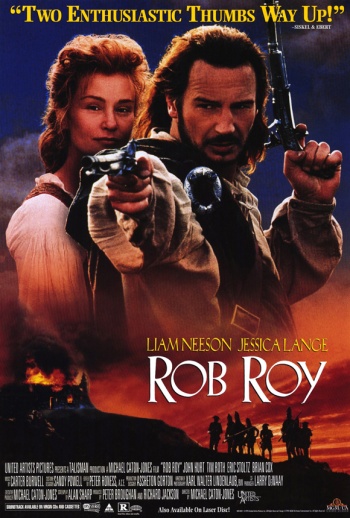 A 1995 film (Very Loosely Based on a True Story, being vaguely inspired by real events; has almost nothing to do with the 1817 novel Rob Roy by Sir Walter Scott) directed by Michael Caton-Jones, starring Liam Neeson, Tim Roth, Jessica Lange, Brian Cox, and John Hurt. It tells the heavily fictionalized story of Scottish folk hero Robert Roy MacGregor, and his part in the Jacobite Rising. While it was overshadowed by that other 1995 movie about Scottish rebellion against the English, the climactic Sword Fight is held up as one of the best in film.

Robert Roy MacGregor is a chieftain in the Scottish Highlands. He borrows £1,000 from the Marquess of Montrose, but it's stolen by Montrose's protege, a deadly fop named Archibald Cunningham (played by Tim Roth, who earned an Oscar nomination).

Montrose agrees to forgive the debt if MacGregor frames his enemy, the Duke of Argyll. He refuses, sees his farm burnt and his wife raped, and is forced to go into hiding. He must find a way to clear his name in court, or failing that, war against those who come after him.

These works contain the following tropes: