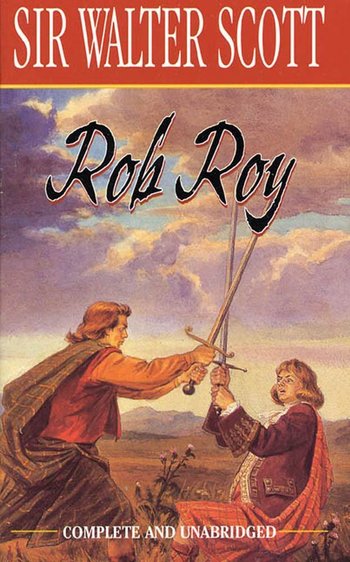 Rob Roy is an historical novel written by Walter Scott in 1817, set in the backdrop of the Jacobite rising of 1715

. Although the novel is named after a historical character, its depiction of Robert Roy MacGregor bears little relation to the real Scottish outlaw/folk hero.

The main character is Francis "Frank" Osbaldistone, son of a rich London trader. When Francis refuses to work in the family business, his father threatens to swap him with one son of his brother Sir Hildebrand, a landlord who lives next to the Scottish Border. Frank sticks to his guns, so he packs his saddlebags and rides north. On the way, he encounters Morris, a faint-hearted man who is deadly afraid of getting robbed, and Campbell, a Scottish cattle raiser who is more than what meets the eye.

Frank finally arrives at Osbaldistone Hall and meets his uncle and cousins, as well as the lovely Miss Diana Vernon, who is engaged to one of the Osbaldistone heirs per an arrangement between both families. As getting acclimated to his new home, Frank soon learns that his relatives are good-natured but dumb, except for his younger cousin Rashleigh who is clever but conniving and spiteful. However, Diana is both good-natured and intelligent, as well as a courageous woman, but she seems to be hiding some secret.

Some few weeks after moving to Osbaldistone Hall, Frank is charged with highway robbery by Morris, who turned out to be a royal courier tasked with delivering Government bills. Dismissing Diana's plea to flee across the border, Frank turns to the local justice of the peace and is cleared of the crime thanks to Campbell abruptly showing up to defend Frank's innocence. Nonetheless, Franks cannot help but think the whole episode was extremely strange.

Eventually, Rashleigh leaves for London to take Frank's intended place as his father's business associate. Frank, who had learned Diana despised Rashleigh to the bone because the man subtly tried to groom her when she was younger, is not particularly sorry to see him leave. Some months later, though, Frank receives terrible news: while his father is away on a business trip, Rashleigh has disappeared after leaving for Scotland with £5,000 of bills he was supposed to use to pay his father's creditors.

Frank departs towards Glasgow, determined to look for his cousin and save his father's firm. Upon arriving in Glasgow, Frank discovers Rashleigh's actions -which include robbing Morris- are part of a ploy schemed by Jacobite partisans to set off a rebellion, and maybe the only who can help him retrieve his father's bills is Campbell, or as he is known among the Highlanders, Rob Roy.

Rob Roy is available in the public domain. You can find the text online at Project Gutenberg

Tropes found in this book: