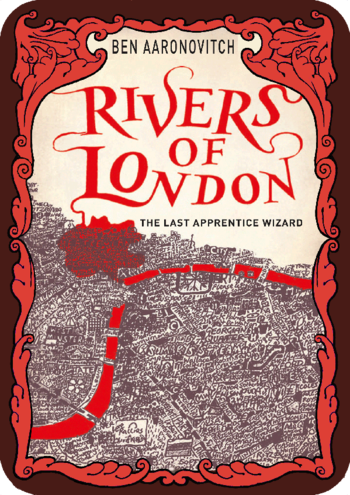 "A police whistle on Bow Street. For a moment I felt a connection, [...] with the night, the streets, the whistle and the smell of blood and my own fear, with all the other uniforms of London down the ages..."
Advertisement:

Rivers of London, named after the first entry in the series, is a series of novels following the career of Peter Grant, Police Constable and apprentice wizard, as he tackles supernatural crime in London with his superior officer, Master Wizard, Detective Chief Inspector Thomas Nightingale. Written by former Doctor Who writer Ben Aaronovitch, the series comprises seven novels so far, plus seven graphic novels, two novellas and several short stories. The series is rapidly heading into Expanded Universe territory, with upcoming novellas and comics featuring different point of view characters, settings and time periods, as well as an upcoming TV adaption by the production company Stolen Picture.

Short storiesCollected in Tales from the Folly (2020)

With its realistic London setting, it's a good example of Urban Fantasy where the Masquerade is maintained by a combination of stealth and public indifference.

In January 2014 it was announced that Titan Comics had picked up the license for a comic book adaptation co-written with Andrew Cartmel, Aaronovitch's script editor during his Doctor Who days. The comic's first arc, Body Work, commenced in April 2015. (See separate entry for the comics.)

In June 2013 the series was optioned for television. In April 2019, almost six years later, it was announced that Nick Frost and Simon Pegg’s UK-based production company, Stolen Picture, has optioned the rights to a television adaption

There is also an official Rivers of London Rap