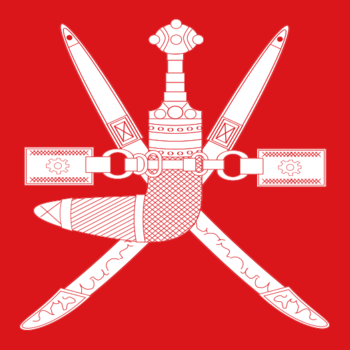 In Oman, their emblem is nothing but weapons.note The center J-shaped object is a sheathed khanjar,

a men's dagger used primarily for ceremonies, but also sees use as a utility knife and self-defense weapon. It is superimposed over two crossed swords.
"Did you see those warriors from Hammerfell? They've got curved swords. Curved. Swords."
— Guards, The Elder Scrolls V: Skyrim
Advertisement:

Just as cultures might have an iconic Battle Cry attached to them, often they will have a weapon that has a similar status. Sometimes it will have a religious or magical significance; it might for instance be a copy of a blade that was Forged by the Gods. Perhaps it typically has a Badass Creed engraved on it. Or maybe it is simply hard to imagine them fighting without it, and even if it becomes obsolete it is impossible to imagine this group parading without it because it has a symbolic status that goes beyond its functionality. As Tropes Are Flexible, this does not have to be a whole culture's weapon; it can be the weapon of any group: say, an order of Warrior Monks, or a Caste or a Secret Circle of Secrets, or a gender. The point is that the weapon is so much connected with a group that it serves as a logo as well as a weapon.

Likely to be wielded by a Proud Warrior Race. Compare Fantastic Race Weapon Affinity. If the weapon in question is a physical part of an alien race's anatomy then see Natural Weapon.