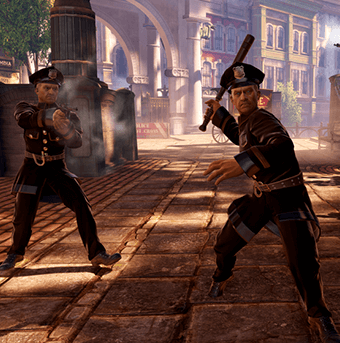 "Smooths the bumps from Justice's path with 'is truncheon, does 'e?"
— Inspector Abberline on Sgt. William Thick, From Hell.
Advertisement:

. There is something of a spectrum within this trope, with the unifying theme being a hankering for direct policing methods unhampered by such niceties as paperwork and the rights of suspects. Or, come to that, the feelings of victims.

At the one extreme are those with a tendency to favour "old fashioned" methods of policing, which usually involve beating up suspects, fabricating confessions (a process known as "verballing") and planting evidence. Being corrupt, misogynist, racist etc. is optional. Basically, the British version of the Cowboy Cop.

At the other end is the Dixon of Dock Green trope, an even more old-fashioned police officer from the days when (at least on television) policemen wouldn't even think about doing the illegal or corrupt, but were permitted to use much more force (both physical and psychological) than is perceived to be acceptable today. Such an Old-Fashioned Copper will likely be The Cape (or one of them) of the franchise — with such a deeply-ingrained sense of fair play, there are few other possibilities for such a person. But he may also take thinly disguised glee in the bad guys getting their comeuppance. Nor would he be above giving (say) a ten-year-old a "clip round the ear", sure in the knowledge that if the child's parents found out they would face much worse.

British cop shows found many intermediates between these extremes and often had characters representing different versions within the same show.

May make use of Torture for Fun and Information.