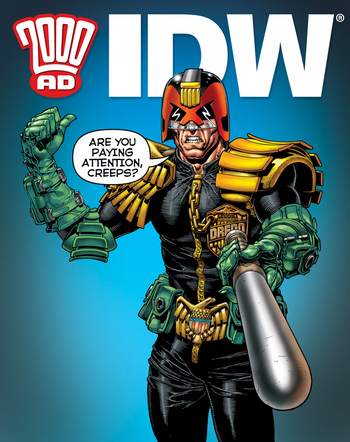 Judge Dredd is about to club you.
Bart: Can I see your club?
Officer Lou: It's called a baton, son.
Bart: Oh. What's it for?
Officer Lou: We club people with it.
— The Simpsons
Advertisement:

Call them truncheons, coshes, billysticks, billy clubs, nightsticks, prods, or what-have-you. Shorter than a Simple Staff, different enough from a generic club to be distinct, the baton is the melee Weapon of Choice of cops, guards, and their ilk.

Depending on the portrayal on the police force, a baton can be:

Sometimes used to perform a Tap on the Head; however, modern UK training discourages it due to the possibility of fatal injury.

They're not used quite as much as they once were now that more sophisticated less-lethal options are available, but they do still have their uses; pepper-spray can rebound on the user in a confined space or if the wind's against you, and tasers are a lot more likely to do permanent damage than a solid whack on the elbow with a big stick.

The Old-Fashioned Copper trope in general also tends to invert the brutality aspect of the trope, since the "no-nonsense" versions prefer guns (in works set at the time when British officers could sign them out of the armoury without much trouble), while the amicable Dixon of Dock Green types prefer old-fashioned truncheons. American officers (at least of the uniformed variety; plainclothes detectives won't be carrying them) will tend to have the tonfa-derived side-handle nightstick on their belt. In feudal Japan, the jitte

(basically a metal truncheon with a prong for hooking the opponent or immobilizing a sword before the user can use it) was strongly associated with officers and served as their badge of office.

In more modern times, many police departments have combined this with Retractable Weapon, thanks to the creation of the expandable baton (also known as collapsible, telescopic, extendable, tactical and spring cosh baton). Mostly because of how easy they are to store and carry around. There's also the option of a sturdy, big and heavy flashlight, which can be just as effective for bludgeoning, while also giving a less-threatening appearance and, of course, being a light source. There's the added benefit that with modern LED technology, a flashlight big and hefty enough to be used as a baton typically has equally big and hefty batteries that last a really long time. If it's seen in the hands of riot control police, almost always expect it to be used in tandem with a riot shield. Giving the officer not only some protection, but let them have two ways to dispense blunt force, from good old bludgeoning with their baton or some simple shield bashing.

Another evolution of this trope is its tendency to crossover with Shock and Awe to create a Shock Stick, especially in more futuristic science fiction settings. This is mostly because the two well-known weapons cops have to subdue perpetrators or suspects in the 21st century are either batons or tasers/stun guns. So why not combine both? Makes the law enforcement and their ilks job of enforcing the law or engaging in some Police Brutality much easier.

Compare Dual Tonfas, Sai Guy (close to the jitte), Carry a Big Stick, Staff of Authority, and Batter Up!. Not to be confused with Battle Baton.

Kuroiwa takes out a blackjack/sap club during his Dynamic Intro before his boss fight.

Kuroiwa takes out a blackjack/sap club during his Dynamic Intro before his boss fight.