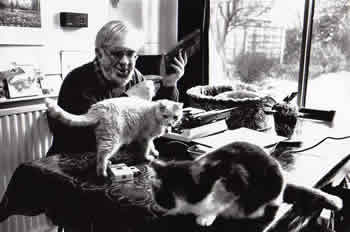 Photo by Don McPhee from Westall's The Guardian obituary
"...take readers by the scruff of the neck and shake them and scare them and make them think for themselves."
Advertisement:

Best-known for his Children's and Young Adult fiction, Robert Atkinson Westall (7 October 1929 – 15 April 1993) was born in North Shields and grew up on Tyneside during the Second World War. He held a Bachelor's Degree in Fine Art from Durham University and a post-graduate degree in Sculpture from the Slade School of Art in London. After spending two years in the British Army he went on to teach Art and write for various publications, including being an art critic for the Guardian newspaper.

Westall's best known work was the Children's novel The Machine Gunners, published in 1975 and winner of the Carnegie Medal that year. He went on to win the Medal once more in 1982 for The Scarecrows. Most of his novels drew on his personal experiences as a child on The Home Front; The Machine Gunners was about a group of young children scavenging parts from downed aircraft who found an intact and functional machine gun from a crashed Heinkel He 111 bomber and developed from him telling his son Christopher stories about the things he had done as a child. The Gunners went on to be adapted for the television by The BBC in 1983 and again for Radio in 2002

Despite the target audience of children and young adults, Westall's fiction was frequently dark and borrowed themes, ideas and stories from the Horror genre and were rarely afraid of killing characters or showing off terrifying situations. The Stones Of Muncaster Cathedral won the Dracula Society's Children of the Night award in 1991. Many of his novels featured some form of Time Travel; Urn Burial and Futuretrack 5 were out-and-out Science Fiction.

Robert Westall died on the 15th April 1993 aged 63. Several manuscripts have been published posthumously and two anthologies of his short fiction were released in 1996.