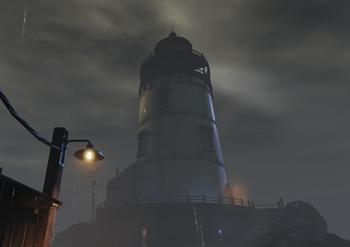 Darkness reigns at the foot of the lighthouse.
"Sea without a shore for the banished one unheard
He lightens the beacon, light at the end of world
Showing the way lighting hope in their hearts
The ones on their travels homeward from afar"
— Nightwish, "The Islander"
Advertisement:

Lighthouses have been around for a long time. At one time they were invaluable to the shipping industry, making sure boats got into harbor without crashing into reefs or the shore. Advances in technology have made lighthouses mostly obsolete, though; GPS

killed off the use of lighthouses in commercial shipping due to being much more accurate and cheaper to use and operate. Nowadays lighthouses are left alone for historical sites and tourist traps. The only places left where lighthouses have any serious use are where radio might not work, where the sea conditions change radically, or in places like harbors with narrow entrances or seamounts surrounded by barely submerged ridges where it is vital that the pilot of a ship have a blatantly obvious marker of where not to steer in the event of an electronics failure or disorienting weather conditions.

Despite their current uselessness, lighthouses have been used as settings in modern and old stories, often in a scary capacity. It could be because the small number of people needed to staff a lighthouse leads to stories about recluses working the lighthouse. Or it could be that lighthouses being usually located on a lone island or a distant cliff makes them isolated and creepy. Add some Ominous Fog rolling in off the coast for extra atmosphere. The height also makes a lighthouse an ideal setting for a Climbing Climax, and relighting a lighthouse is a common quest for heroes.

Of course, it can just as easily be a Subverted Trope. The protagonists could stumble upon a lighthouse that initially appears abandoned but is actually inhabited and well maintained.

Lighthouses do not necessarily have to be haunted to be good for a setting; they can be just as atmospheric on their own. But the characters have to interact with it in some way.