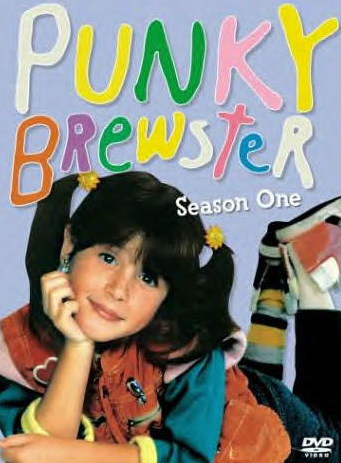 Punky Brewster is a 1984-88 Dom Com created and executive produced by David W. Duclon and airing on NBC and later in Syndication about abandoned child Penelope "Punky" Brewster (her father walked out on her and her mom left Punky and her pet dog, Brandon, at a grocery store), played by Soleil Moon Frye, and her adoptive father, Henry, played by George Gaynes (best known for his role as Cmdt. Lassard in the Police Academy movies). Also revolves around Punky's interactions with her best friend, Cherie Johnson, played by Cherie Johnson (who later went on to play Laura Winslow's friend Maxine on Family Matters), who lives with her grandmother, Betty, played by Susie Garrett. Punky's other friends include geeky Allen Anderson (Casey Ellison) and stuck-up rich girl Margaux Kramer (Ami Foster). During the NBC run, Punky's teachers were frequently seen. In the first season, Punky's teacher was cheerful Mrs. Morton (Dody Goodman), while in the second season, it was hip Mike Fulton (TK Carter). Also seen briefly in Henry and Punky's apartment building was kooky maintenance man Eddie Malvin (Eddie Deezen).
Advertisement:

Well-loved Kid Com of The '80s (by kids, anyway--critics hated it), especially when it re-ran in syndication. Did a Very Special Episode after the Challenger space shuttle explosion.

The show was originally produced by Lightkeeper Productions, David W. Duclon's production company, alongside NBC from 1984-1986, when NBC cancelled the series. After the NBC cancellation, Duclon teamed up with Columbia Pictures to produce two additional seasons in syndication from 1987-1988. Today, Sony, which now owns Columbia Pictures, hold domestic rights to the series, while NBC holds international rights.

An animated adaptation by Ruby-Spears also was shown on NBC from 1985-1986. It added a magical furry creature named Glomer whose magic enabled new kinds of misadventures.

In September 2019, it was announced that a sequel series was being produced for NBC's then-upcoming streaming service Peacock, with Frye reprising the role of Punky, now a single mother trying to get her life together. Punky Brewster (2021) premiered in February 2021.

Not to be confused with the early Devin Townsend album.

The sitcom contains examples of: