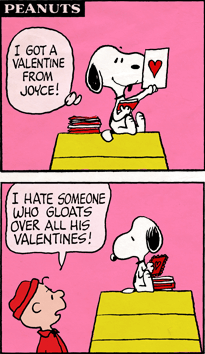 Valentine's Day is a holiday that primarily celebrates romantic relationships. Couples are encouraged to display their affection for one another in public, as well as buy presents for each other, some presents tackier than others.

For various reasons, not everyone is enamored with Valentine's Day; some outright despise it. This may be due to various factors, including lack of romantic involvement with anyone else on the part of the hater, their disdain for what they believe to be unnecessary spending, or if they are romantically involved, because they feel that Valentine's Day merely existing cheapens the displays of affection, due to the fact that one is expected to act more romantic on Valentine's Day. And it's particularly irritating if they find themselves Alone Among the Couples.

In any case, this may bring the character in question into conflict with people who do like Valentine's Day, perhaps even their own love interest.

This trope can be Truth in Television, with multiple factors contributing to this phenomenon, including the ones just mentioned above.

Compare Birthday Hater, when someone holds negative feelings towards one's birthday; The Grinch, when the disdain is aimed at Christmas, and Crappy Holidays, for holidays in general being miserable. See also Valentine's Day Episode, where this trope may show up, and Anti-Love Song, a musical trope with similar sentiments.