Western Animation / The New Adventures of Winnie the Pooh 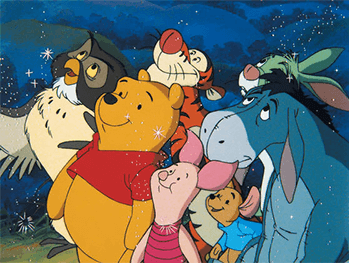 In a word, "Why, it's spectacular!"
Advertisement:

The New Adventures of Winnie-the-Pooh is a Disney animated TV series in the style of the original The Many Adventures of Winnie the Pooh, the second Winnie-the-Pooh television series. It ran originally started on January 17, 1988 on The Disney Channel, moving to ABC's Saturday morning lineup in September of that same yearnote That season, its second, joining up with the fifth of Adventures of the Gummi Bears for The Gummi Bears/Winnie the Pooh Hour and airing new episodes until October 26, 1991, while reruns aired until September 4, 1993 and again from December 9, 1995 until September 7, 2002 (except for a brief period from September-December 1996), including a spot on Disney's One Saturday Morning and also on Disney's Playhouse Disney block. It also had a number of VHS releases and was also featured on a number of DVDs. The show also won back-to-back Daytime Emmy Awards for Outstanding Animated Program twice in 1989 and 1990.

Despite ending its run after four seasons, the show was kept alive for more than a decade and a half afterward through reruns, package films consisting of footage from the show, along with standalone episodes making ideal extras for many video and DVD releases of later Pooh featurettes.

Surprisingly for the source material, this was a Darker and Edgier installment by Pooh standards, with real villains and peril for Pooh and friends in some episodes and diving into heavy, mature themes. It's also noted for having the occasional Story Arc such as the story of Kessie, a bluebird who Rabbit finds and adopts.

The show's recap page is under construction.

The New Adventures of Winnie the Pooh provides examples of:

Gopher: Might be painful... but it could hurt alot, too.
Feedback

Roo sends Stan and Heff away

The instant Roo stands up to Stan and Heff, Heff mistakes him for a mouse and freaks out, causing the duo to flee for now.

Roo sends Stan and Heff away

The instant Roo stands up to Stan and Heff, Heff mistakes him for a mouse and freaks out, causing the duo to flee for now.