Caged Inside a Monster 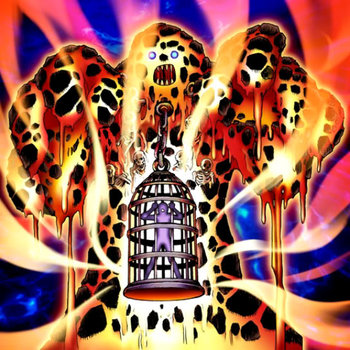 Marsupials and some other animals have pouches to carry their young. This trope covers fictional creatures with a built-in cage or cavity in which to hold a prisoner captive, or possibly a group of captives, usually the Damsel in Distress, the sage, the hero's Love Interest, or another loved one. The prisoner often has a view to the outside world, the better to cry for help. They may also be unconscious, or partially merged into the creature's flesh.

This is often a cage (or ribcage) with bars made of bone and flesh, or sometimes an extra mouth full of sharp teeth. A Blob Monster is often involved in cases where the prisoner is merged with its captor. May involve being Swallowed Whole, in which case Getting Eaten Is Harmless. It can also be a Crystal Prison or a bubble of translucent flesh. In about half of all of the latter two cases, you can often expect the prison to also be the enemy's power source and weak point. Most of the time, however, the monster will use its captive as a Human Shield instead forcing rescuers to be careful in their attacks.

Invariably a case of Our Monsters Are Weird, this monster is often a Giant Mook in service to the villain, but may be the Final Boss, and possibly even the villain themselves after they go all One-Winged Angel. Often a demon, Giant Space Flea from Nowhere, or giant skeleton. On a less monstrous note, it may be a robot Super Cop with one or more containment pods, or a whimsical animal with Bizarre Alien Biology. Heroic examples tend to be rare, but can happen, typically by playing up the cartoonishness of it.

This is not the same as a Womb Level: the character may or may not be in danger of being digested or having their soul devoured, but they're stuck inside the beast, not walking around inside its guts.

Compare Treasure Chest Cavity and Stomach of Holding. Compare to Sealed Inside a Person-Shaped Can, where the imprisonment is extradimensional or spiritual rather than physical.