Series / The Book of Pooh 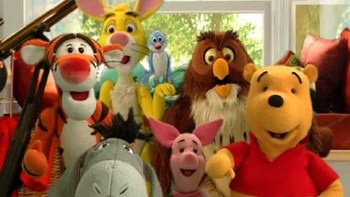 The Book of Pooh is a children's television series that aired on Disney Channel, the third to feature the characters from the Disney franchise based on A. A. Milne's Winnie-the-Pooh works. It premiered on January 22, 2001 and completed its run on July 8, 2003.

The show is something of a Spiritual Successor to the 80s' Welcome to Pooh Corner, using a similar live-action green-screen format; yet here all the cast are depicted by puppets and the backgrounds are full CGI 3-D. Besides some minor liberties with the continuity and traditional characterizations of Pooh and friends, the show sticks closely to the usual storytelling and aesthetics of the Disney franchise, with even most of the then-current voice cast reprising their roles; this is, in fact, the first Pooh series to have Jim Cummings as the full-time voice of Tigger after sharing the role with Paul Winchell for later episodes of The New Adventures of Winnie the Pooh, as well as the first series to feature Andre Stojka as Owl (after having been voiced by original actor Hal Smith for New Adventures), Kath Soucie as Kanga (reprising the role from The Tigger Movie), and Nikita Hopkins as Roo (previously voiced by Nicholas Melody).

The series aired as part of the "Playhouse Disney" block, suggesting an audience of preschool children, though some of its mechanics seem somewhat advanced; it strongly incorporates reading concepts and basic introduction to literary devices, similarly to Adventures in Wonderland (and even boasts an Oxford curriculum, as seen in the end credits).

So it's goodbye for now
To all of you
We'll meet again when we all come
Into the book of Pooh.

Pooh and co. say goodbye to the audience until they watch the show again.

The Book of Pooh

Pooh and co. say goodbye to the audience until they watch the show again.

The Book of Pooh