Series / The Book of Daniel 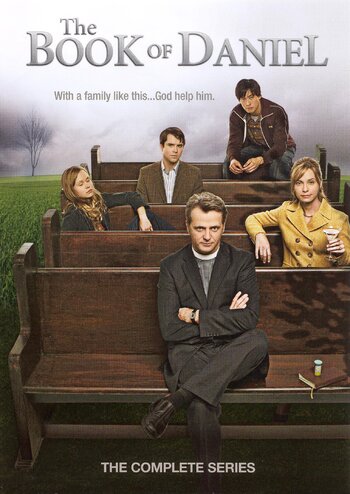 The Book of Daniel was a short-lived American drama series that premiered in January 2006 on NBC. The series centered around the life of an Episcopal priest and his family. Promoted as edgy and challenging, the series proved controversial and was canceled just a few weeks into its run. Only 11 episodes were actually made, with three going unaired before the series was pulled.

The Reverend Daniel Webster (Aidan Quinn) is a troubled priest who's addicted to painkillers, with a wife named Judith (Susanna Thompson) who's a bit too fond of midday martinis. Daniel and Judith have a 23-year-old son named Peter (Christian Campbell), a 16-year-old daughter named Grace (Alison Pill), and an adopted 16-year-old Chinese son named Adam (Ivan Shaw). Webster's father Bertram (James Rebhorn) is a retired bishop who's involved in an extramartial affair with Bishop Beatrice Congreve (Ellen Burstyn), Webster's superior in the diocese. Webster's mother is suffering from Alzheimer's disease, which his father has difficulty in dealing with.

The series starts off with Webster's brother-in-law stealing from the parish and abandoning his family, along with the Websters retrieving their daughter Grace from a local police station after her arrest for drug possession.