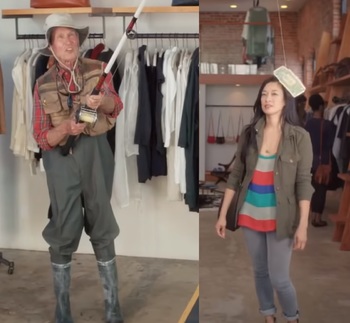 "I got you a dollar!"
A type of prank involving a tied dollar bill, or some valuable object or even food, left on the ground and then pulled away when someone attempts to pick it up. May be used as a lure.
Advertisement:

Compare Coin-on-a-String Trick, where the victim (usually a vending machine) believes they've ended up with the money. Often a form of Motivation on a Stick.