We'll See About That 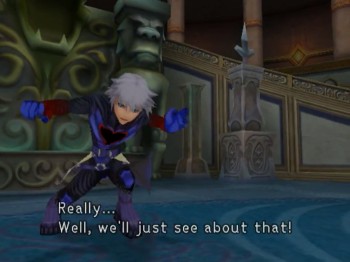 A Stock Phrase that is typically uttered by the Big Bad after being told that the protagonist is there to stop them. This almost always leads directly to the Fight Scene. Typically used to show the arrogance of the Big Bad in thinking he can't be stopped by anyone. If he loses, expect him to have a Villainous Breakdown that invariably includes This Cannot Be!.

Alternatively, the hero will be saying this to the Big Bad, typically in response to the Big Bad's taunts that "You're too late to stop me", "I AM INVINCIBLE!!!!", "You Have No Chance to Survive", etc. Less patient heroes will say it while the Big Bad is still taunting them.

You Are Not Competitive

You Are Not Competitive