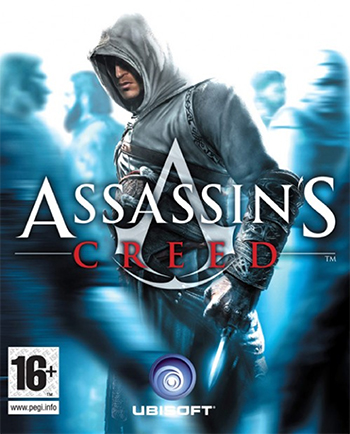 You are a blade in the crowd.
Stay your blade from the flesh of an innocent.
Hide in plain sight.
Never compromise the Brotherhood.
Nothing is true. Everything is permitted.
Advertisement:

Assassin's Creed is a 2007 action game from Ubisoft for PlayStation 3, Xbox 360 (backward compatible on Xbox One and Xbox Series X|S) and PC and the first game in the Assassin's Creed series. It takes place in the Holy Land, 1191 AD, where disgraced Assassin Altaïr ibn-La'Ahad works to redeem himself by eliminating nine men in several cities who are prolonging the Third Crusade. Altaïr has swordfighting moves at his disposal, as well as a mastery of Le Parkour, throwing knives, and a nifty retractable blade.

While that describes the majority of the game, there's a Framing Story. Desmond Miles is an ordinary bartender, circa September 2012, when he's kidnapped and delivered to Abstergo Industries, where Dr. Warren Vidic has him subjected to a device called the "Animus", which allows its users to experience Genetic Memory. Desmond is a descendant of Altaïr, and Abstergo wants to know what Altaïr knew.

Altaïr's story begins when he breaks the three tenets of the Assassin's Creed on a mission to recover an artifact from Robert de Sablé, a Templar leader. Altaïr kills an innocent, refuses to remain discreet by unabashedly facing the leader alone, and compromises his two brothers: one of whom is killed, while the other, Malik, loses his arm. Al Mualim, master of the Assassins, demotes Altaïr to the bottom of the ranks, strips him of most of his gear (and most of his skills, explainable in that he required the gear for many of them — no sword skills without his sword, no ledge-grabs without his gloves, etc.), but tells Altaïr that he must eliminate nine corrupt, exploitative men who are abusing the Holy Land, perpetuating the Crusades and generally kicking the dog. Altaïr has the chance to recover his lost prestige by killing these men, all of whom seem fairly confident in their righteousness when killed. Not surprisingly, there's a lot more going on behind the scenes that causes Altaïr, and his descendant Desmond, to question what is truly happening in the world around them.

The game's plot bears many similarities to the 1938 Slovenian novel Alamut, though there are enough changes to say that it isn't an adaptation so much as a simple case of "Inspired by…".

The concept was initially developed as an entry in the Prince of Persia series but developer Patrice Desilets felt that the historical branch of the Assassins were worthy of their own game and myth. It shares much in common with Prince of Persia: The Sands of Time with its Le Parkour related combat and gameplay, the Nonlethal KO mechanic to maintain Gameplay and Story Segregation, a process which Desilets described as "organic design". The end result was a Genre-Busting exercise that combined Wide-Open Sandbox exploration, social-stealth gameplay and combat, set in a historical backdrop brought to vivid life.

As the game ended with a clear Sequel Hook and sold extremely well, it should come as no surprise that a sequel was developed, and that single game has since spawned a long running franchise.

The PC port was given an Updated Re-release in the form of a Director's Cut, which adds four new mission types and tweaks existing missions to break up the monotony present in the original version.

Also note that this page may contain unmarked spoilers.

At least from Desmond's point-of-view; the first thing you do in this game is snap out of Eagle Vision, said ability being the last thing Desmond used before the first game abruptly ended.

The Apple of Eden

At least from Desmond's point-of-view; the first thing you do in this game is snap out of Eagle Vision, said ability being the last thing Desmond used before the first game abruptly ended.

The Apple of Eden