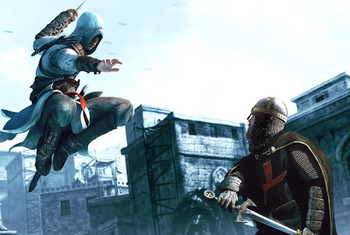 This trope is about two characters or factions that antagonize each other. The specific relationship the two of them share can vary from mere rivalry, to being sworn enemies, to just being complete opposites, but the point is that they are pretty much Foils to each other, and most likely to not be in a good relationship. Typically, their archetypes use the following rules:

This trope is seen in many cultures and settings: in Japan, we have Samurai (Chevaliers) and Ninjas (Rogues); if magic is present in the setting, Chevaliers will often be an Anti-Magical Faction (though exceptions do exist) and Rogues are more likely than the Chevaliers to have access to mystic abilities; in nautical settings, the Rogues may be Pirates and the Navy the Chevaliers, and so on.

See also Noble Male, Roguish Male, in which the Chevalier and the Rogue are on the same side instead of fighting against each other and Samurai Shinobi, in which the Samurai (Chevalier) and Ninja (Rogue) are combined into one by one character.