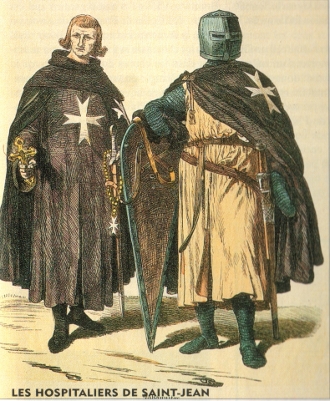 Pray they heal, not put you in the hospital.
He doesn't necessarily hit you with his sword arm. He hits you with his faith.
— Dungeons & Dragons designer Andy Collins, on 4th Edition Paladins
Advertisement:

The Warrior Monk is a fighter defined by their faith, which serves as a weapon and armor the equal of any mundane wargear. He focuses his mind with sacred chants before the battle, quotes scripture while he smashes aside infidels, strikes with absolute conviction, and fights without fear or hesitation. He is a combination of the archetype of the warrior and the archetype of the shaman. Both archetypes share the need of rites of passage.

This character is often a member of a Church Militant, be it a martial-minded sect within a larger religion or the divine army of a powerful theocracy. Other Warrior Monks have more diverse backgrounds, and could hail from actual monasteries, master-apprentice relationships, or could even be self-taught. Warrior Monks may be shining examples of a religion's ideals, or in some situations may end up fighting a Church Militant if the latter has become a Corrupt Church. Others may ignore religious politics altogether, doing more for their faith by acting as an example.

If their cause is worthy enough, these characters can be among the most noble heroes in the world. Other times, Warrior Monks can become self-deluded extremists who let the end justify the means. Either way, Good Is Not Soft is likely to be in effect. It is also important to remember that evil churches can have (un)holy warriors, too.

This character type is usually confined to medieval settings, though modern examples exist. See Badass Preacher for when a holy man takes up arms to protect his flock, and Church Militant for religions that don't shy away from violence. Can sometimes overlap with Master Swordsman. Bare-Fisted Monk is a subtrope, and is by no means confined to Eastern-style Warrior Monks. May have Enlightenment Superpowers. Some examples of a Warrior Monk may be encouraged by their order to be a Warrior Poet. Due to many religions following the practice of tonsure, Warrior Monks who wield magical or mystical powers are also likely to be a Bald Mystic.

Comic Books
Fan Works
Film — Live-Action
“You must not grow too attached, too fond, too in love with life as it is now. The emotions are valuable and should not be suppressed… but you must learn to rule them, Padawan, lest they rule you.“
—Jedi Master Depa Bilaba (Kanan: The Last Padawan)
Literature
Live-Action TV
Tabletop Games
Video Games
Web Comics
Web Original
Western Animation
Real Life
Feedback