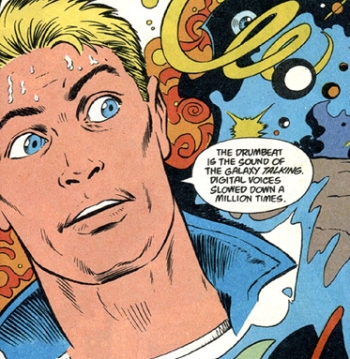 "In this time, the most precious substance in the universe is the spice melange. The spice extends life. The spice expands consciousness."
–- Princess Irulan, Dune

Most fiction that deals with recreational drugs either explicitly states that they are bad, or uses them as a neutral plot element. However, there is also fiction where drug use is shown to have benevolent effects. One way of doing this is having someone gain a deeper understanding by taking drugs.

In these kind of stories drugs can help a character in adjusting to her situation and understanding the things around her better, or they can even make her gain some new knowledge she couldn't have otherwise acquired. In the latter case drugs are usually implied to have supernatural or mystical qualities, and using them gives the character a temporary access to what amounts to Psychic Powers.

When this trope is used, the drug in question is usually either cannabis, ecstasy, or some type of psychedelic,

such as LSD, peyote, mescalin, or psilocybin. A Fantastic Drug may also be used, but its effects are often portrayed similarly to those of real life drugs. For obvious reasons, drugs that make one act selfishly or aggressively – such as cocaine or amphetamine – are rarely depicted as pathways to deeper understanding. This may be portrayed as 90% of Your Brain since psychedelic drugs increase connectivity between different brain regions, allowing people to make associations they never would have considered before.

Higher Understanding Through Drugs is often combined with Vision Quest, though the two tropes do also appear separately. If the story focuses on a drug with a long history of ritual use (such as peyote), it's common for the characters to imitate these ancient rituals while taking the drug, sometimes with the help of a native mentor. In visual media, if the drug use entails a hallucinatory trip, it's usually illustrated with bright colours and surreal imagery. If a human mentor isn't there to guide the character through the trip, a Spirit Advisor may appear and serve as a guide.

If Higher Understanding Through Drugs is used as a defining character trait, the character is typically an Erudite Stoner. Junkie Prophet is a subtrope where the use of drugs specifically helps someone foresee the future. Drunken Master is a related trope, where alcohol temporarily enhances someone's physical skills. If a drug grants someone actual physical superpowers, we're dealing with a Super Serum.